Lazaro Arbos, may you go all the way!

I dreamt I saw Scatman John last night, alive as you and me...

Last nigh I met “Scatman” John Larkin. Unfortunately only in my dream, as he is no longer with us. And I was not in this dream either. It was more or like a Glee-inspired show. As I still miss John, it didn’t surprise me I woke up and still remembered parts of my dream, which is very unusual for me. So what I’m going to write down are only traces of it. Bear with me.
John Larkin was, Scatman John, with his special outfit, black suit, black hat and special style. He was the popular singer, famous for his scat-sound. And of course he stuttered as he did in real life. But he was tired of the fame and fortune, people pulling him into all kind of directions, directions he not always wanted to take. He just wanted to “strip”, taking off his suit and hat, skip the crowd around him, no more travelling the world for just one gig. Simply going back to his piano,  being John Larkin, doing his thing.
But he couldn’t. And remained Scatman John. And thank God for that.
He knew that what he was doing was important,. Not only singing the way he did, paving the road for people who want to have their own style. Not only spreading messages of love and peace by writing lyrics that makes you think and take a stand. But most of all singing and talking about stuttering, being the first who openly sang positively about stuttering and that we’re ok, stuttering and all. He knew that so many people who stutter are not happy with themselves, being bullied and given bad self-esteem.
So he couldn’t. And wouldn’t. He remained Scatman John. And thank God for that.

I think this dream was partly true. He wasn’t the man dancing on the table and a lot of his character was exactly that: a character. He was surprised over the media attention and didn’t really know what to do with it. But despite all, he was his own true self when talking and writing to people who stutter of all ages. Giving them faith in themselves and the courage to stand up and make our voices heard. We had great email chats, he coached lots of people all over the world, all on friendly basis, and wrote to the young people coming to the European Youth Meetings for people who stutter. He never denied his stutter in public and by doing that, he opened up the stage for so many other people. Remember Idol Gareth Gates?
A few weeks ago he sent me a message through a medium session, my first ever, telling me to keep on spreading the word, as he knows my call in life is just that.  And now he appeared in my dream, still worrying over his legacy to help people who stutter. So I beg of you all, who have found a fulfilling life, despite, or maybe even thanks to, your stutter, to step into his footsteps and keep on making new ones. To pave the way for those who still are searching to find themselves, to find their voices and to find others who stutter.
Some of us are more or less fluent, others still stutter. Some of us are still searching for the magic pill, a therapy that fits, a job, a partner, a dream, a future. Others have already found it. But no matter where you are today, please spread the word. Get stuttering out of the closet and on everyone’s agenda.  The more people who know what stuttering is about, who hear people stutter “in real”, who know how to react and who treat us just like any other person, the more we can make this world a better place.
“Where people have time to care. Where everybody's equal. And we all tell the truth. “
A Scatland.
Keep talking
Anita Blom, Scatsis 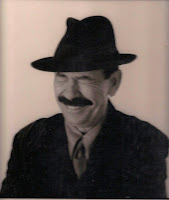 “Everybody stutters one way or the other
So check out my message to you
As a matter of fact
Don't let nothing hold you back
If the Scatman can do it
So can you
Everybody says that the Scatman stutters
But doesn't ever stutters when he sings
But what you don't know
I'm gonna tell you right now
That the stutter and the scat is the same thing
Yo, I'm the Scatman”
From “I’m the Scatman  - Scatman John”
http://www.youtube.com/?v=aN6XyybL98c

With love to my darling friend Judy McHugh Larkin, who lives way too far away from me. <3
Upplagd av Scatsis kl. 19:45 Inga kommentarer:

Keep smiling and the world will smile at you. :-)
Upplagd av Scatsis kl. 23:03 Inga kommentarer: